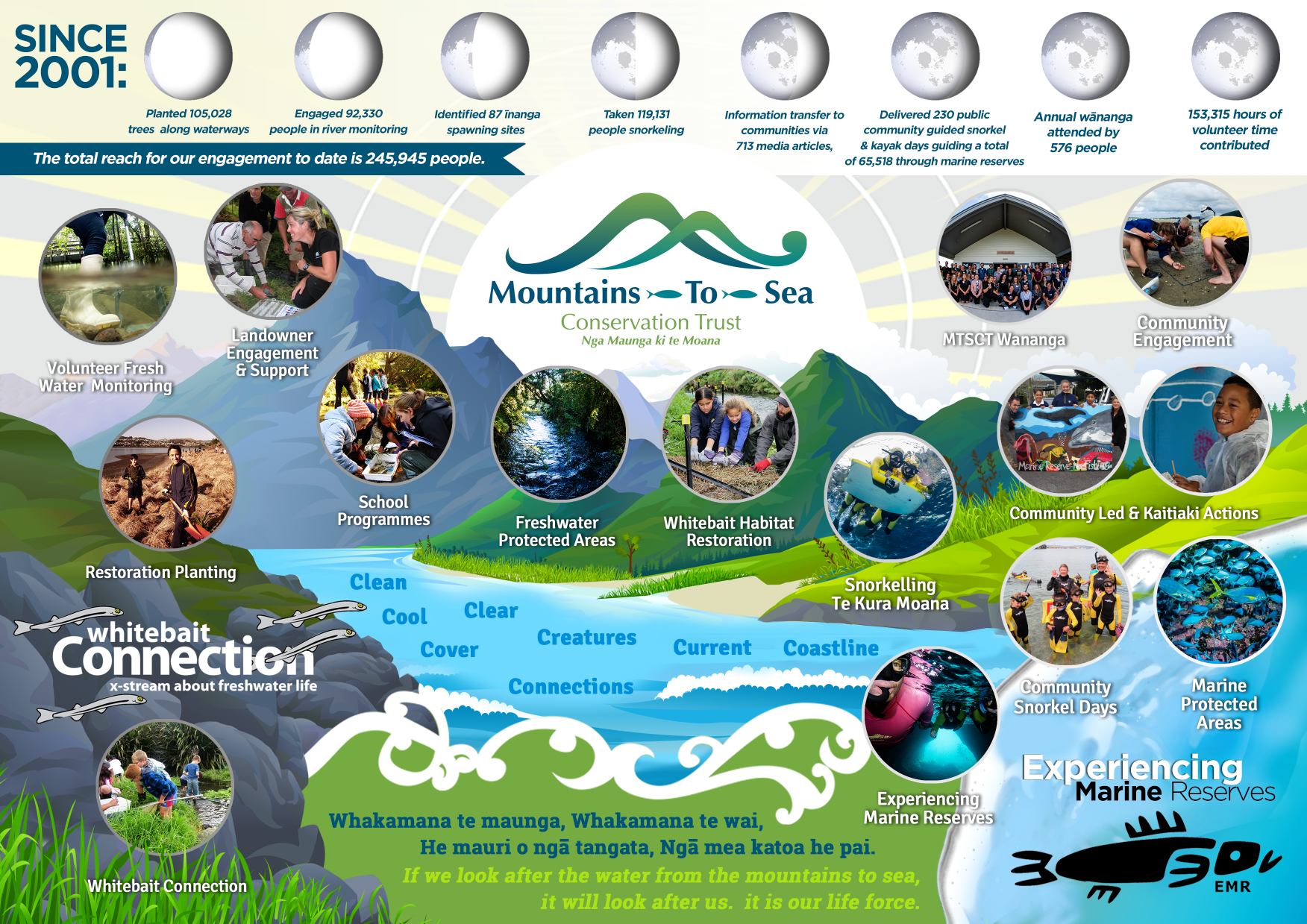 The Northland-based Mountains to Sea Conservation Trust (CC23406) was established in 2002, as a charitable umbrella and support organisation for the Experiencing Marine Reserves (EMR) ma

rine education and Whitebait Connection (WBC) freshwater education programmes. These are both leading models in education for sustainability in Aotearoa/New Zealand. 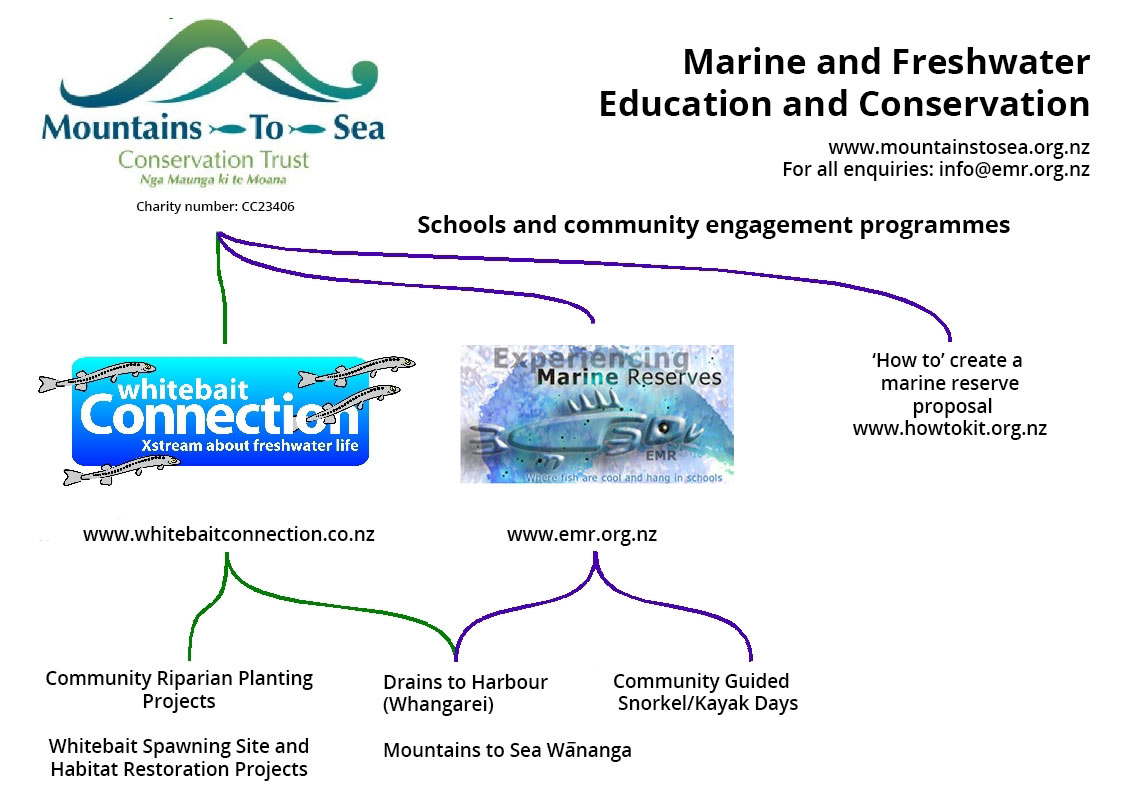 In the vision of our Trust, the biodiversity of our ocean, coastal areas, our streams, rivers, lakes and wetlands is respected as a taonga (treasure). We view these systems as a whole with no boundaries. Restoration of any part of the system supports the whole. Ours is a special generation, we have the opportunity and obligation to reverse past trends of exploitation of the natural world. We feel there is an urgent need to halt continued degradation of the natural systems and biodiversity upon which all life ultimately depends. In the social and cultural realms there are positive paths forward which we will work to develop and support.

The Northland-based Mountains to Sea Conservation Trust was established in 2002, as a charitable umbrella and support organisation for the Experiencing Marine Reserves (EMR) marine education and Whitebait Connection (WBC) freshwater education programmes. These are both leading models in education for sustainability in New Zealand and now available nationally.

In addition to EMR and WBC we have developed a range of supporting projects, resources and services such as community guided snorkel days, community events for Seaweek & Conservation week, DVD’s, the MarineNZ website, and the Drains to Harbour and Mangrove Discovery programmes. A diagram of the structure of the trust and its programmes can be viewed by clicking on the link at the top of this page.

The Trust recognises the Treaty of Waitangi and will strive to honor the principles of this founding document. The partnership between the cultures challenges us to learn from and respect the knowledge and wisdom underlying the tikanga (tradition) of our indigenous culture. Empowerment and restoration of the kaitiakitanga (guardianship) is a critical challenge and an even greater opportunity in today's society.

The Trust sees education as a vital part of society and central to all environmental restoration. We will support the community in every way possible to develop environmental education that is based on experiential learning and engagement in real environmental challenges and opportunities facing communities.

The Trust works from a vision that sees communities ultimately holding the solutions and resources to tackle the environmental problems that we face today. The Trust will strive to work in ways that builds community involvement, fosters equity, and works toward a shared vision of ecological sustainability as the basis of all community.

We embrace a philosophy of experiential learning and fostering community engagement in education for sustainability and action. Our work is unique in its simple yet powerful principles and robust scientific foundation. Through this we deliver solutions to some of New Zealand’s most pressing environmental challenges.

An inspiring blend of community based social marketing, education for sustainability and community engagement principles, combined with demonstrated passion and leadership from our trustees, consultants and co-ordinators provides us with a special ability to motivate change.

Vince is a biologist with a background in environmental education, forestry, horticulture and conservation management and currently works for his own firm Kerr & Associates, based in Northland. Vince is a strong advocate for marine conservation and played a key support role in the Kamo High School Whangarei Harbour Marine Reserve campaign. Vince is the driving force behind our Trust project www.reefsavers.org and website www.marinenz.org.nz He is currently a non-consulting trustee. Vince has responsibility for advising on any issues and supporting consulting trustees.

Hilton sees life as an opportunity to continually learn and change. Hilton has been fortunate to spend half of his working life free diving for rock lobster, paua and sea urchin. The balance was spent in real estate. He saw both of these as wonderful opportunities to learn about himself and his connection with his surroundings. Hilton is a PADI Rescue Diver and a knowledgeable businessman. He believes our future is linked to how we treat our environment today. Hilton has added value to the trust in the areas of financial processes and strategic vision as a non-consulting trustee.

I am a senior tutor at NorthTec Whangarei, and teach subjects ranging from ecology to conservation to the dreaded statistics. My interest in ecology and conservation was sparked when, as a child growing up in London, I found out that I was never going to be able to see such wonderful creatures as moa, huia and dodo, as every last one had been exterminated by humans, directly or indirectly. After leaving school in England, I followed the zoological pathway, completing a BSc Hons at the University of Canterbury (NZ), majoring in ecology and invertebrate physiology. For my PhD at Waikato University, my studies focused on biological control of pastoral insect pests using endophytic fungi of grasses. After post-doctoral studies on endophytic fungi at the University of Tennessee, and several years as a research scientist with AgResearch at Ruakura and Grasslands, I was able to rekindle my passion for plants, animals and their conservation when I took up my current post at NorthTec. Since my arrival at NorthTec, I have been lucky enough to participate in several research projects, including studies on freshwater invertebrate communities of northern Northland dune lakes. What a stunning environment we have, and how lucky we are. That is why I am so happy to support the amazing work of the Mountains to Sea Conservation Trust.

Manuel Springford decided to speak Te Reo on Mondays - wherever he goes, whoever he meets, he speaks Māori. It's his way to keep his native tongue alive.  Manuel is committed to Te Reo and surrounds himself with the language in his day-to-day activities, but it was a different story as a youngster - he didn't even know his grandfather could speak Māori. His initial reason to learn the language was to converse with him, so started his reo journey in 2009.  He started Māori Mondays in May 2009 after hearing about Mahuru Māori, another Māori language initiative that encourages people to speak Maori in September. Mr Springford thought he'd start early and commit to one day a week. His commitment to the language has inspired many in his community to give Te Reo a go. His local bakery, the Baker's Crust, has included Te Reo in their business - such as renaming their monthly speciality pies in Māori.  Mr Springford normalises Te Reo in his workplace, at home, everywhere. While Māori Mondays started out as a way for him to korero Māori more often, the ripple effect has been far wider.

Matt is born and bred in Whangārei. He has a bachelor of management studies from Waikato University and is a partner in a software development company. Matt is on several not for profit boards that focus on education, the arts and skills development for young people. He has many years of experience in the development and implementation
of strategic planning for not for profits. Matt has been on many EMR school trips withhis 3 daughters and has seen first hand how important and effective it is to make the education of tamariki about the environment and ecology an adventure and fun.

I have had an association with the sea ever since I can remember. Being in, or on, the ocean is my second home. I spent seven years in the RNZN as a radio operator, but also qualified as a navy diver for a second skill. Apart from coastal fishery patrol boats, I served on HMNZS Tui (which is sunk off Tutukaka) and HMNZS Canterbury (sunk in Deep Water Cove). Both ships are now refuges for marine life and great dive sites. In 1973, while on HMNZS Canterbury, I was one of the volunteer crew that went to Mururoa Island to protest against atmospheric nuclear testing by the French, on behalf of New Zealand. The circle now seems complete with Canterbury continuing to be a safe place for marine life and my association with EMR. After I left the Navy I worked in communications for several years, until I decided my future lay in the aquatics industry. When living in Australia I qualified as a swim teacher, teacher of life saving and swim coach. I also qualified as a life guard and went on the manage an outdoor pool in the summer over four seasons. Currently involved with local schools doing WaterSafe and water awareness. EMR attracted me because it is fantastic to be able to share my love of the sea, and marine life, with people who have never experienced it before. I also enjoy the challenge of helping people to overcome whatever fears they may have about being in the ocean.

Eden has been a teacher for the past 15 years and her passions are Science and Environmental Education hence her new job with Enviroschools, Northland Regional Council. She has been an Enviroschool facilitator since 2017. Eden is working with 40 schools in Northland promoting Education for Sustainability. In 2012.  Eden had a Science Fellowship with Mountains to Sea Conservation Trust and was able to work alongside Experiencing Marine Reserves and Whitebait Connection. In 2015, she was awarded a Science Alumni award for the work she had been doing with science with a huge emphasis on Environmental Education.

Roger was a well known marine biologist and professional photographer. Roger was an active campaigner for marine conservation in New Zealand and internationally. He played a role in many of New Zealand’s marine reserve campaigns and was a frequent contributor of articles on marine conservation to popular magazines. Roger was involved as a supporter and biologist for the Great Barrier, Tiritiri and Mimiwhangata marine conservation projects. Roger received the Queen’s Service Medal for public service in 2005. Roger supported the trust programmes as a non-consulting trustee, but also with photographs, expert biological advice, peer review and decision making with regard to grants and programme direction.  He is sorely missed and his legacy will live on through the Dr Roger Grace Memorial Fund.

mara is a founding member of the trust and is a Poutokomanawa/Co-Director - Marine Lead. She was recognised in 2005 in the Sir Peter Blake Leadership Awards. She holds a Bachelor of Applied Science degree from AUT and is a graduate of Northland Polytechnic’s Diploma of Environmental Management. Samara established the Experiencing Marine Reserves programme in 2001, and the EMR community guided snorkel days in 2004. She is also a graduate of Kamo High School where she was Head Girl and played a key role in the school’s marine reserve proposal and establishment. Samara is a PADI Dive Master and a registered assessor for unit standards in snorkelling. Samara is a consulting trustee and has responsibility for the overall management and direction of the marine programmes of the trust. She is also the national EMR coordinator and was awarded a MNZM in 2018.

Kim is the Poutokomanawa/Co-Director - Freshwater Lead and national coordinator for the Whitebait Connection Programme. Kim has led the national expansion of the Whitebait Connection programme since 2008. Kim was an EMR coordinator from 2005-2014 and founded the trusts Drains to Harbour programme. She is a graduate of the Diploma in Environmental Management and Conservation at Northland Polytechnic and a PADI DiveMaster. Kim also has a National Certificate in Business Administration and Computing. Kim is experienced with goverannce and has been selected to be on many different committees and boards including a selected member of the youth delegates at the 2006 Digital Earth symposium on sustainability, a committee member of the New Zealand Association for Environmental Education, Northland Branch, Whangarei Harbour Marine Reserve Advisory Committee, Whangarei Harbour Catchment Group and National Advisory Group for Volunteer Freshwater Mointoring. Kim is currently also working towards a Bachelor of Applied Science at NorthTec.

Whakamana te maunga Whakamana te wai He mauri o ngᾱ tangata Ngᾱ mea katoa he pai
If we look after the water from the mountains to sea, it will look after us. It is our life force.