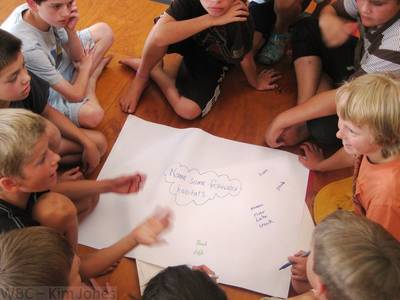 At the start of the programme we did some brainstorming and saw that the students had a varied range of awareness about whitebait and the freshwater environment, but that they didn’t really know much about what lived in the local

or how to tell if a stream was healthy or what they could do to help local waterways and whitebait. There was very limited initial knowledge about whitebait in general so this was a great topic to build from.

Parua Bay and the Whangarei Heads area is generally in pretty good shape compared to a lot of other areas. It has many steep short catchments that often flow through bush remnants and in some cases nearly a full forested catchment (as in the Kohinui) so there were lots of different places to explore and compare healthy with not so healthy areas. 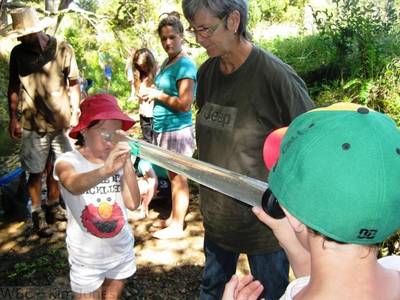 Our objectives were to:
- create awareness in the students and their community about freshwater biodiversity,
- values of freshwater,
- interdependence,
- local threats to freshwater and
- kaitiakitanga

Collect evidence of prior learning and baseline knowledge then build from there letting the students be part of the planning and inquiry. Visit local areas to be inspired to take action for the environment.

We visited four different waterways with these students and you can see the photo story from all of those field trips here.

Inspired by their experiences, students went on to take action for the freshwater environment!

- All students learnt more than what they started knowing about whitebait and freshwater.

- Many students learnt first-hand about the importance of shade for freshwater and also fencing off from stock.

- Students learnt lots about whitebait including their biology, ecology, threats (like hanging culverts) and their values.

- Students learn how to apply their learning in an action context – kaitiakitanga. 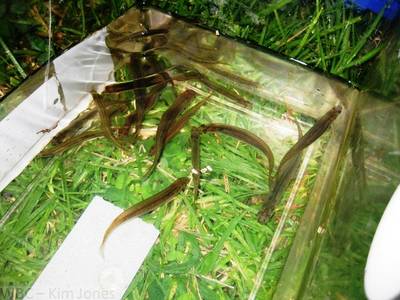 - Room 5 painted an awesome billboard showing the make up of a healthy stream.

- Some students created a boardgame that helps you understand about freshwater wildlife.

- Some students created posters to put around school to tell others no to litter.

- One student’s father who came along on the field trips has now fenced off is planting an area of stream on his property.

- Fundraising for rubbish bins at the beach.

- Making an IMovie about doing a stream cleanup – we’re making the permission slip and script and will clean up the Parua Bay beach. Project – two hands, 30 minutes audit.

- Posters for people polluting streams and ponds round school and long-term signs at the beach.

- Pippa is getting solar panels put in at school to help stop hydro dams.

- The neighbour’s creek will now be monitored.

“I haven’t littered the whole time since I’ve done this programme and I stopped my brother from littering”. 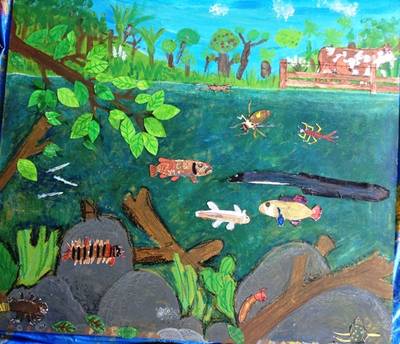 Room 5's painting that went on display with the key below in the school office foyer. 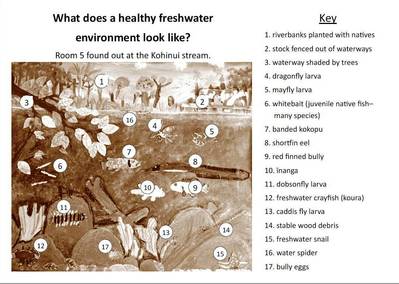 - Worked well with NZC – booklet was excellent!
- We now realise the connection which is VERY important to us because of the unique environment that we live in (Whangarei Heads) There are many water-ways which of course enter our biggest catchment – Whangarei Harbour.
- Kim is awesome – she engages children very well – passionate but gentle approach, she listens to the students!

Parua Bay School took part in a Whitebait Connection experience with coordinator Kim Jones in February and March 2012 whilst studying Water Conservation. They found an amazing diversity of life in their local stream and got up close and personal with an abundant population of Eels, Banded Kokopu and Redfinned Bullies!

Here are the results of what they found.

Here are the photos from the Year 6, 7 and 8's experience.

Here are the photos from the Year 4 and 5's experience.