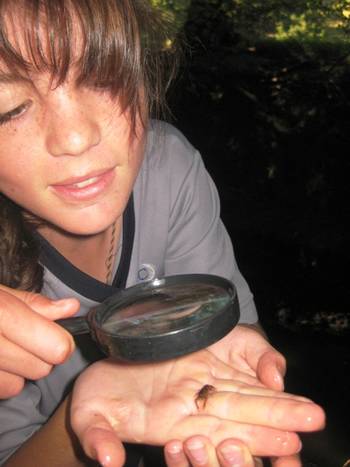 Huanui College's year Year 10 Social Studies class were looking at 'Global Perspectives' in Term One, 2011. Teacher, Kristen Sanderson, wanted the students to take part in the Whitebait connection programme as part of this focus so they could learn about their local freshwater environment and also consider how that compares with global freshwater environments.

They started by learning about freshwater environments and Whitebait in the class as well as being treated to a visit by American artist and educator, Stephanie Bowman, who was in New Zealand talking about her Longfin Eel project. This really helped with getting a global persepctive!

Next we ventured out to the local stream by the school to see what we could find. We found some Koura, macroinvertebrates and freshwater mussels - both are which are currenlty threatened so that was awesome to see!

Next we went on a full day field trip to investigate the wider Horohora Catchment - following it all the way down to the estuary where it meets the sea. We stopped at a river sampling site along the way and caught heaps of Longin Eel elvers - another threatened species living in the Horohora catchment! After walking downstream via a bushtrack we discovered a huge waterfall that the Elvers must have just made thier way up - this gave us a whole new respect for these creatures!

All of this information was reported on by the students and they did research projects about Longfin Eels. As part of their 'taking action for freshwater' project they decided that they would restore the wetland area by their school and were successful in gaining NRC funding for this project so fencing and planting is expected to happen in Term 3, 2011. Awesome stuff Huanui College!!